The Medical Republic: Our driving choices can help us breathe easier 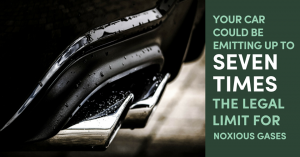 The so-called diesel-gate scandal where the Volkswagen Group was caught out cheating United States’ emission controls is well known, but less recognised is that Australia has a vehicle and fuel emissions problem as a result of a lax regulatory framework.

A report by the OECD revealed that 1483 premature deaths in Australia in 2012 were due to outdoor air pollution, half of those from road transport (the rest being from coal and industrial processes). The authors calculated the cost to the economy from these deaths at $7.8 billion[2].

The Australian Institute of Health and Welfare stated in the Australia State of the Environment Report 2016 that about 3000 deaths are attributable to air pollution in Australia each year at a health cost of $11-24 billion per year.[3]

Emissions from transport contribute to the leading causes of death in Australia, including heart disease, stroke, chronic lung disease, lung cancer, dementia and asthma. Children exposed to such pollution have higher rates of asthma and school absence and show evidence of reduced lung function which persists into adulthood[4].

The culprits are particulate matter, which can penetrate the lungs and enter the blood stream, ozone, oxides of nitrogen, sulphur dioxide and volatile organic compounds. Diesel emissions have been classified as a Class 1 carcinogen. A study by Professor Adrian Barnett of Queensland University of Technology agreed with other studies that women exposed to greater levels of traffic pollution were more likely to have premature babies.[5] The World Health Organisation concludes, “new evidence no longer supports the notion that there is a safe level for pollutant concentrations”.[6]

As Australia’s population and car ownership grows, it’s imperative that we act on rising transport emissions. The AAA study should provide some much-needed data and an impetus to address the problem. We know already that air quality in our cities often exceeds air quality standards [7][8] and this policy may provide some impetus to action by government.

The Ministerial forum on Vehicle Emissions plans to submit to government an implementation plan which will address both pollution and efficiency sometime this year[9].

It could start with mandating the tighter emission controls for new vehicles which are in place in Europe: Euro6 for light vehicles since 2014 and EuroVI for heavy vehicles for over three years. Emission control devices help and the AAA initiative to measure emissions under real world driving conditions can prevent “diesel-gate” type cheating.

Much more can be done before we need to start introducing levies on polluting cars as will be the case for London’s city centre from next Monday[10] or banning diesel cars from entering our cities, as is happening elsewhere.[11] [12]

Stamp duty on new cars varies across state jurisdictions, with most states basing their stamp duty on the vehicle sale price.  Price, however, should reflect both pollution potential, and, as happens in the ACT, emissions of CO2 per kilometre.

Excise on diesel fuel should reflect the harmful, carcinogenic, properties of diesel emissions. Uptake of diesels in Australia, particularly sport utility vehicles (SUVs), has been high in recent years because of perceived advantages of fuel economy, and because of heavy marketing, but cannot be justified in light of the health burden they impose.

There is also good news for drivers in the transformation of transport. Low emissions vehicles offer potentially large fuel savings. Electric cars offer more choice and are approaching price parity as well as having very low maintenance and running costs. Some models already boast a range of several hundred kilometres on a full charge, but there is inadequate infrastructure to support them in Australia at this time and their big advantage from a climate point of view will not be fully realised without more renewable energy in the grid.

The Government’s proposed National Energy Guarantee plan of a 26% reduction in emissions from electricity generation leaves transport and agriculture to do all the heavy lifting on meeting our obligation to the Paris Agreement to reduce emissions.[13] Transport emissions have been rising faster than any sector[14].

Will Australia follow California and Norway in reducing pollution and carbon dioxide emissions from transport? It remains to be seen.

Dr Graeme McLeay is an anaesthetist and a member of Doctors for the Environment Australia. He is the owner of a diesel car which he uses as little as possible while waiting for a suitable EV to arrive in Australia.

First published in The Medical Republic on 26 October 2017

Share Article:
REGISTER FOR iDEA JOIN DEA NOW and make a difference! DONATE we rely on your support FACT SHEETS