Firefighting chemical spill by Qantas, Brisbane: where to now?

On the evening of April 10, a hose in the Qantas hangar at Brisbane Airport leaked approximately 5,000 litres of firefighting chemicals into nearby waterways. The foamy spill made its way from the airport to the nearby Boggy Creek via a drain, then to the lower reaches of the Brisbane River and north to Nudgee Beach and Shorncliffe dispersed by the tides and wind.

Testing of nearby Boggy Creek on April 11 over 12 hours after the spill revealed the presence of two dangerous toxins, PFOA and PFOS. PFOA was found at over 50 times the recreational water quality limit, and PFOS more than double. These poisons persist in the environment and will bio-accumulate up the food chain for decades.

I learned of the spill on 14th April when I received an email from DEA toxicologist and advisor Mariann Lloyd-Smith. I was concerned because I lived at Nudgee Beach and knew it would be a busy Easter weekend there so I called a friend at the ABC. He sent me the media release from the government around 8.30 pm and then I called him and recorded a short interview for radio, and he picked a couple of segments and used them.

One segment was “the decision to wait four days to disclose details about a toxic firefighting foam spill at Brisbane Airport borders on negligence” The ABC had arranged for someone to meet me at Nudgee Beach to interview me and get some boat and fishing footage at 7am. That was sent to 7, 9, 10 and ABC. I did more interviews at Nudgee Beach later that day and made the news on all stations.

Visions of dead fish floating in the foam followed by fears of fish and prawns with higher levels of PFOA and PFOS were just the beginning of a media frenzy over the next week. The support of the DEA media team enabled me to have exposure in the media and Mariann Lloyd Smith helped me with the toxicology of PFOA although she was in Geneva at the time.

Through the interviews and conversations with journalists I realized I had much to learn and the support from DEA doctors and media experts was exceptional and resulted in many more stories in print, radio interviews and television footage including “contaminated prawns sold to the public”.

On April 14, Qld Health recommended not to eat the fish, but then mixed the message by stating there was no consistent evidence of health effects from these chemicals. Then a week later on Friday 21st April a media conference in the morning stated that all the tests results found water quality was safe for recreation. They didn’t release the results that showed PFOA at 50 to 60 times the limit until 7 pm that night (most journalists had gone home by then).

We prepared a media release initially based on “no data =Lack of transparency failing health.” Then when results were released at 7 pm, DEA prepared another release. I did an interview for ABC radio about the high levels of PFOA and PFOS found on the tests.

The ABC shot footage of me at 7am on the 25th after I finished night duty at the hospital. Qantas later that day had called a press conference and used the 7am footage on all channels discussing the long term effects of this spill. No doubt this was in part due to the media coverage our small team had achieved.

At Oakey, Queensland, and Williamstown, New South Wales, there are now class actions against the government due to firefighting foam spills and the persistence of these chemicals in the water. Indeed high PFOA and PFOS levels have now been found near military bases and a number of commercial airports around Australia.

While the boats that fish and prawn are considering legal action over this man-made environmental disaster, the public are still being misled by the health department. The Department continues to state there is no consistent evidence despite DEA publicly highlighting the dangers of these chemicals and the scientific research linking these persistent organic pollutants (POPs) with severe health effects in multiple species including humans.

In conclusion I think the Queensland government hoped this toxic spill would fly under the radar. Their delayed release on a holiday made it a bigger story.

My lesson is that a local environmental disaster may be a tragedy, but it is also an opportunity for change. To be ready to respond quickly requires a team of people such as that provided by DEA . We cannot undo the Qantas spill, but we can change what happens in the future to protect the public from further environmental disasters. 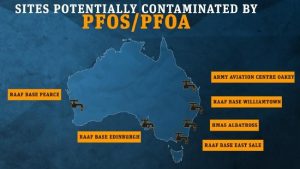