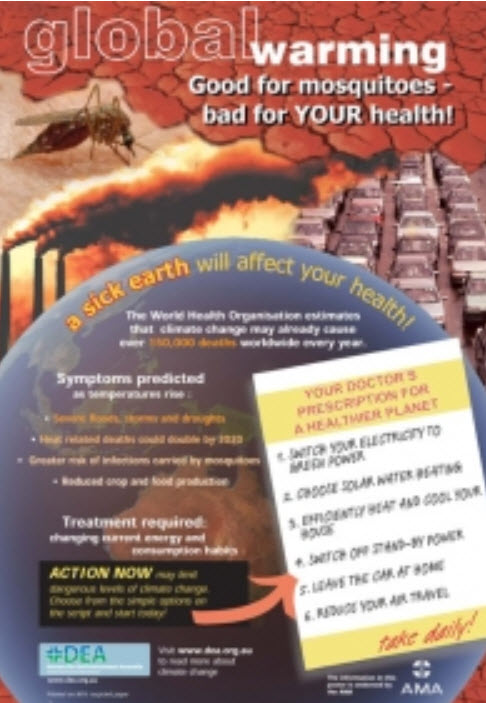 Why is climate change so serious?

Climate change happens when the earth heats up because of too much carbon dioxide and other ‘greenhouse gases’ in the atmosphere.

Climate change is already happening. Temperatures and sea levels are rising and rainfall is changing. The CSIRO predicts that by 2030, annual average temperatures in Australia may be up to 2.0°C higher than in 1990.

“Climate change is the most severe problem we are facing today, more serious even than the threat of terrorism”.

This may not sound like much but many species and ecosystems are very sensitive to small changes – just as small temperature changes in the human body can be very serious. Most scientists believe that just a temperature rise of just 2 degrees would trigger dangerous consequences for living systems.

Climate change is also likely to bring more extreme weather, such as heatwaves, severe storms and floods and increased risk of bushfires in some areas. These changes are expected to take their toll on the health of the population (particularly older people).

We are changing the climate

An overwhelming majority of scientists agree that our activities are responsible for most of the recent and predicted climate changes. We produce the greenhouse gases causing climate change by burning fossil fuels for electricity and transport. Electricity production accounts for 35% of Australia’s greenhouse emissions.

“Climate change caused by the release of greenhouse pollution will affect human health on a scale not previously encountered by human society”.

In Australia climate change may mean:

Some harmful diseases carried by mosquitoes could survive in more areas
At present, mosquito-borne diseases such as dengue fever and malaria can survive in very few areas of Australia. The expected climate changes would make new regions susceptible to diseases – placing many more people at risk. If we do nothing about climate change, by the end of this century the dengue virus may be able to be spread as far south as Sydney.

Changing rainfall patterns and more strain on our water supply in some parts of Australia
Reliable access to clean water is vital for our health and for food production. Climate change may bring longer and more frequent droughts to southern Australia, increasing the strain on water resources and stress on communities. South-west WA has already seen significant drying since the 1970’s, partly due to climate change.

We have solutions to avoid dangerous climate change.

Most scientists now think that a two degree rise in Earth’s average temperature would trigger adverse consequences for living systems. So while some climate change is unavoidable, but it is vital that we avoid this dangerous level of climate change.

The Science Academies of the G8 nations.

By using energy more efficiently, producing energy from renewable sources like solar and wind, and being smart about our travel choices we can substantially reduce the production of greenhouse gases.

Choose one of the simple and cheap actions from the script and start today – it’s not too late!